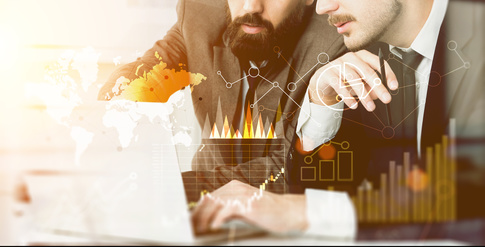 Binary options were first unveiled to the public in 2008. It was at that time that binary options (also referred to as “digital options” by some), made their appearance on the Chicago Board of Exchange as an asset which could be traded.

During the same year, the financial markets struggled mightily, as the US mortgage crisis directly and negatively impacted the global markets. These events would play a critical role in the formation of binaries, as traders were seeking different forms of investing that offered lower levels of risk. As a result, binary options were propelled to popularity.

What is a Binary Option?

The relatively simple nature of the binary option’s payout has meant that people could easily trade it and always knew the risk that was involved in the trade. That level of “maximum loss” certainty provided these traders a great opportunity to bet on particular directions in the financial markets. For perspective, knowing Binary options basics will help you understand their specific appeal.

While 2008 was an important year for binary options, the financial instrument was actually invented many years prior. In the past, binaries had been offered as an investment product that was only offered to major investors trading in the OTC markets, as well as banks.

In this regard, the story of binary options differs only slightly to the story of Forex, which would be deregulated in the late 1990s. While many comparisons still exist between these two forms of trading, it is important to note that Forex trading and binary options trading do have several core differences.

The roots of binary options date back to 1973, when the Chicago Board of Exchange was new. At that time, options trading began. There was no regulation in place at that time, and therefore this form of trading was not without its share of challenges. Even so, binary options trading began to stand out, due to the simple structure that it offered for regular traders. These options were offered to bank and major investors, as mentioned previously, without any regulation and without any separate liquid market in place.

This would continue on until 2007 when real estate prices in the United States began to collapse. At that time, the Options Clearing Committee (OCC) introduced changes that would boost binary options, giving it financial asset status and allowing binaries to trade within the major financial exchanges.

The OCC had been given the task of developing a binary options regulatory framework and had been in place since the 1970s. The US Securities and Exchange Commission agreed to the recommendations of the Options Clearing Committee in 2008, paving the way for binary options to be offered in major markets as a financial instrument. The American Stock Exchange would go on to also begin offering binary options, with the Chicago Board of Exchange following soon after.

The Explosion of Retail Trading

As groundbreaking as these changes were, it was not yet easy for the average trader to trade binaries. Binary options trading software deserves much of the credit for the mass popularity of the instrument. The invention of the software for both personal computers and mobile devices was a game changer.

Over time, more and more brokers have entered into the market, offering their clients a host of trading platforms, analysis tools, and a wide variety of option types, underlying assets, expiry times, and more. Recent regulations have led to even more variety being offered, including the option to close a trade prior to the end of the expiry period.

Traders are the ones who have truly benefited from the many changes that the binary options market have undergone and it is exciting to imagine what is next for the industry as a whole. For now, new traders entering the market can expect to find plenty of variety and plenty of profit opportunities. There are also many brokers to choose from, accepting minimum deposits of as low as $10. While there are many changes taking place at the moment, it is quite clear that the current overhaul of binary options is most certainly not the end.